The Scots Rule .... "Deception of a Highlander" Madeline Martin


When Mariel's parent's die, Mariel and her little brother have to fend for them self's. Living on the streets, with no money has been hard but they thrive on hope of better days.
But now, Mariel's brother is sick and nobody will treat him if she can't pay.

As his sole caretaker, Mariel's priority is to protect her brother but in the end without money they cannot survive in the streets. But there are always  vile people lurking in the dark and preying on to those who are desperate.

Now, to save her brother from the clutches of those who blackmail Mariel, she must perform the hardest task that has been put upon her and perhaps loose the one man her heart will love forever. 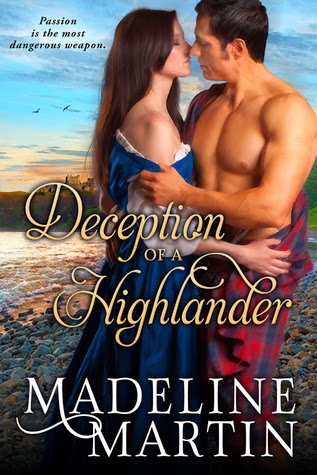 I have to be honest, when I arrived at the end of the third chapter, I really didn't care much for Mariel. I kept reminding myself that all she did was to save her brother and that M. Martin had a plan to turn around this character, to make me love her by the end of the book, so I carried on.
Really a surprising twist in a female character that starts out as a spy working for the enemy and turns out to be a kick ass woman of her time. You're forgiven Mariel.
The author induced a development in Mariel, hinting the why and at the same time showing that her actions didn't speak for her character. With battles, feelings for Kieran, and the faith she has in her heart, the heroin is a woman to be admired.

Now Kieran MacDonald is another story. He stood out of the pages and conquered my heart immediately.
Such an honorable soul, a hunk of a man, sweetness in his touch and love in his heart.
The author knew how
From London to Scotland travel with Mariel and Kieran to find out what it is like to be swept away.
Posted by Wildflower at 23:24