AT THE STROKE OF MIDNIGHT, THE HEAT BEGINS

On a hot southern night, with a storm on the horizon, a family is shattered. Three beautiful daughters—Savannah, Samantha, and Sabrina Wilde—go on with their lives, each significantly changed, as they bear the memory of the murder-suicide that killed their parents. For years, they have stayed away from Midnight, Alabama. Until Midnight calls them home.

Savannah is the first one back, when a grueling case in Nashville leads the young prosecutor to seek shelter in the quiet of the once grand Wilde mansion. But when she finds letters casting doubt on her family’s dark, shameful past, she realizes that peace in Midnight is a shallow façade and sinister secrets lurk beneath the surface. Zach Tanner, once the town’s bad boy, is now the new police chief and still has a wild hold over her. Zach can feel it, too, but he hurt Savannah once. As teenagers, they broke every rule together. Now it’s his job to keep her safe, even though he isn’t sure who her enemies are—or which ones might be his own.

From Ella Grace, pen name for the NYT best selling author Christy Reece, comes a new series filled with murder, mystery and love.
This time we are invited to meet the southern town of Midnight, Alabama, with it's warm and gossipy minded life, and particularly the three beautiful Wilde sister's.
On this first book we get the story of Zack Tanner, the former bad boy and today's sheriff of Midnight and Savannah Wilde.

I'm a big fan of the small town romance, with all it's gossip and mysteries, and the connection of strong characters that spice up the plot and the romance in the book.
The bad guys are always mad and ready to take down the values we cherish, the romance is always hot and steamy, with an alpha male in the middle, and in the end the good stick together and get through all the heartache.
It's a successful recipe that various authors have the ability to write and grant us with fine, relaxing and dreamy hours of rest.

This book starts out with a heartbreaking grief, a family destroyed, and a murder occurred 18 years ago when the parents of Savannah are murdered.

In the present time, Savannah is a well known prosecutor and she is as hard as it gets. Because of her life shattering experience at such a young age, her carrier move explains the kind of woman she is ... get the bad guys and above all justice.
But everyone always as a soft spot and Savannah's is Zack.
The eternal bad boy that only was good with her and was the love of her life, and to the present time, the only one.
This character is flawless, even in her youth. From then until now, as we read, we find that her evolution and maturing was quite balanced, even in the worst of times. She still can feel and love those who matter to her and is compassionate with Zack, giving him the chance to explain and trying to understand why he left her.
Savannah is also a heroine, fearless, and a companion to her man, never backing down and always taking danger face to face.

Zack Tanner, the goody town sheriff, is not such a bad boy but one whom life and family never gave the chance of being a good boy. He had a ruff time in his youth but he made it through and turned himself into an independent and worthy man. I admire him for that and I also admire Ella Grace's writing for making me understand a fictional character that really could be my prince charming.
I'm usually a romantic fool, but I like when a man knows that he has wronged his way with the woman he loves and never quits to make it work, making everything to take her back into his life. Thank you M. Grace for being an awesome character writer and making up all this beautiful people, really.

I found the plot solid and one thing I have to stand out is that I never guessed who was guilty and mad until the end, I kept on reading, page after page, and finished the book with an OH!, I would have never guessed.
There was not one bad thing that I would stand out and I fully recommend, go on buy the book, it's a keeper.

If you're interested in knowing more about the author or Midnight follow the links:
http://www.ellagracebooks.com/ and http://ellagracemidnightbooks.blogspot.pt/

The next book is coming out in September 24, 2013 and is called "Midnight Lies", I can't wait for Samantha and Quinn. Well I'll give you something to water your mouth, if you liked the cover of the first book, tell me what you think of the second ... 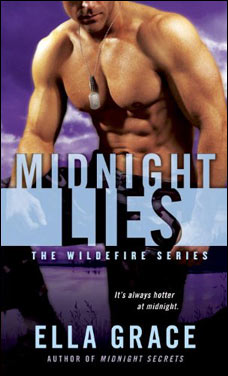